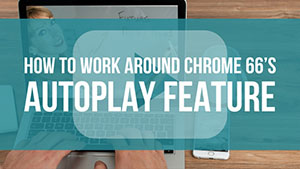 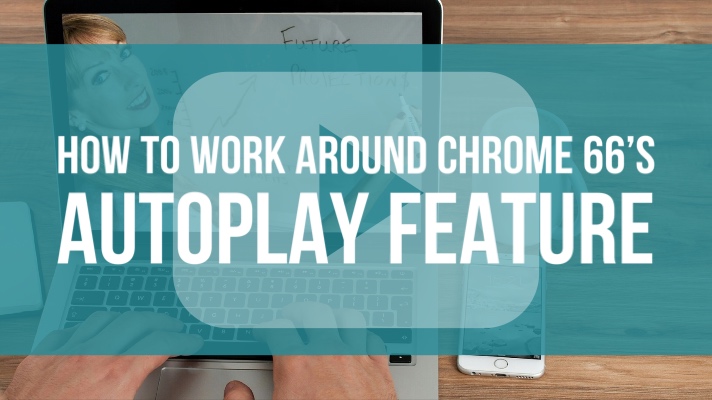 How to work around Chrome’s Autoplay feature

Last November, e-learning developers were faced with Safari 11 preventing video from autoplaying on the first slide in Storyline courses. Now it’s time for folks to deal with a similar change in Chrome 66, and later.

The change to the Chrome Autoplay Policy impacts both video and audio on opening slides.

The Impact to Storyline Courses

It all depends on what Google calls the Media Engagement Index (MEI).

The idea is that over time, the MEI will learn if audio was previously allowed to play on a website. Once the MEI has learned that audio is ok to play for a course, it should autoplay again as normal.

The good news, again, is learners can fix the issue on their end by changing a setting in their Chrome flag preferences. Although the setting is a global one, our initial testing has shown that ads and autoplaying media on well-known, public sites appear to still be paused.

To make the change, copy and paste this address into Chrome’s URL bar:

That will take you straight to the setting that we’ll be adjusting, without needing to scroll.

Open the drop-down menu and change the setting to, “No user gesture is required.”

Learners will need to refresh the page for the setting to be applied. At that point, the auto-playing video and audio will play again.

Another option would be to change our fundamental approach to e-learning design. Specifically, avoiding audio and video media on opening screens.

This will likely spark a larger discussion about what it means to ensure an engaging experience, but it certainly is a more scalable solution in instances where we cannot adjust the setting on learners machines.

As e-learning developers, it certainly gives us more control over the situation and the solution, but does it come at a cost to the user experience?

It’s worth noting that Chrome is notorious for changing core functionality with each release, more regularly than other browsers. That said, this workaround may stop working at a later date, without notice.

We’ll continue to monitor this movement in the web-browser landscape, and how Articulate and other authoring tools respond to it.  But one thing is for certain, this is the new normal and it isn’t likely to go away anytime soon.

What do you think? Share your thoughts and reactions in the comments, below.

5/15/18 Google has temporarily rolled back the Autoplay Policy Feature with a new version of Chrome 66 (released on May 15, 2018). This however, will only be a temporary reprieve as Google is now planning to re-launch the feature with Chrome 70, in October 2018.

Articulate has announced plans to develop a content updater for Storyline 360, Studio 360, and Storyline 3 that will allow developers to mass update published courses. You can read more about their plans and approach, here.

We’ll keep sharing updates from Articulate and Google as they become available.

View all posts by Mike Jones →